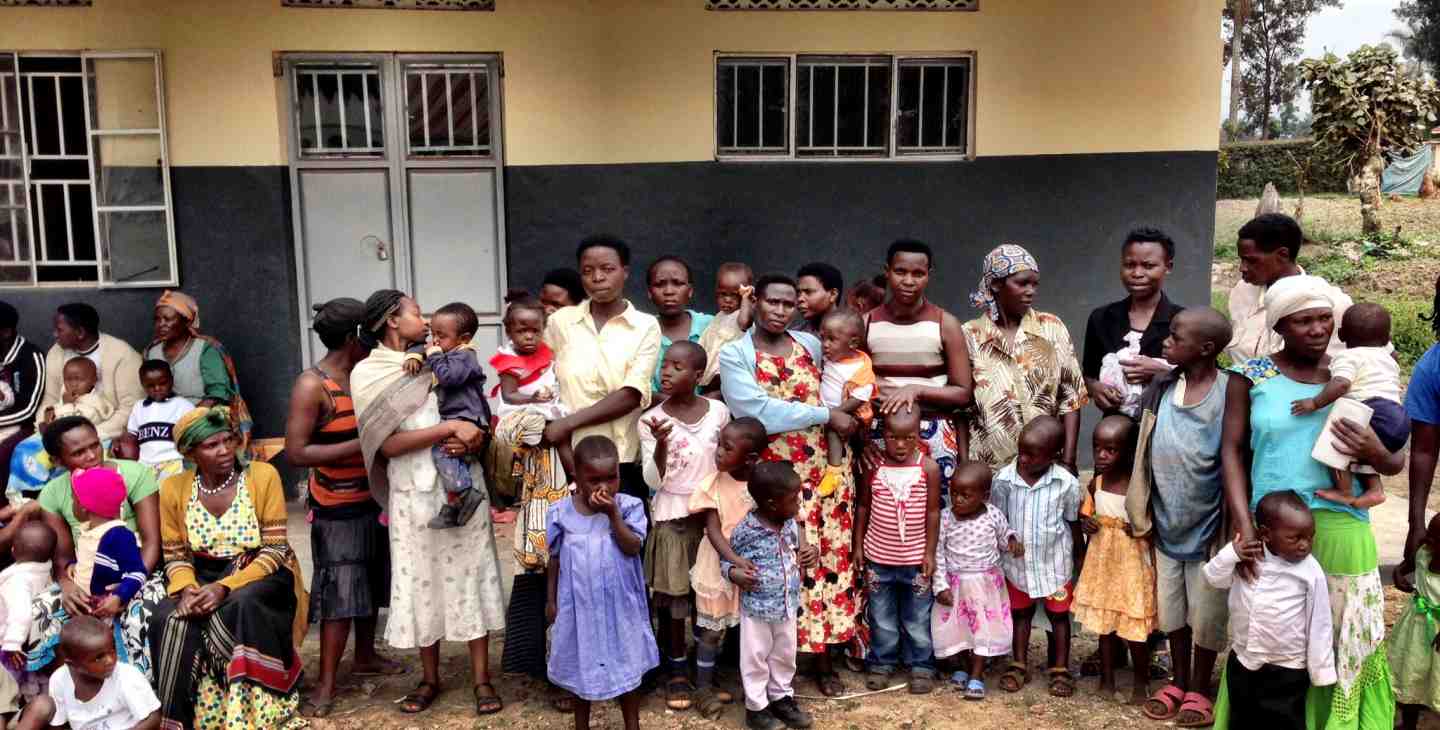 December 2013 marked the two-year anniversary of the Pediatric Palliative Care Program run in collaboration between CFHI partner, Pallium India, and the Department of Pediatrics and Pediatric Neurology at S.A.T. Hospital, Government Medical College. Since the outpatient clinic began, 208 pediatric patients have received palliative care services for life-limiting or life-threatening diseases. In celebration of two successful years, CFHI provided funding to bring together approximately 100 families to build community support and forge closer connections as their children fight for life.

HIV/AIDS cases along the Oaxacan coast increased sharply around 2008 amongst youth age 16-25 years old. Simultaneously, the rate of teenage pregnancy, illegal drug use and violence amongst this age group began to peak. 3 CFHI participants created an HIV/AIDS awareness outreach and education program, Youth United or Jovenes Unidos. Along with two psychologists from a local health organization, they trained 15 local high school students on sexual education, STDs, HIV/AIDS and risky behavior. The students would then present at high schools to educate their peers. In addition to support and exposure, CFHI provided funding for A/V equipment, training materials, transportation, and a stipend for a Local Coordinator managing administrative and outreach efforts.

Puyo is located in the Pastaza Province of central Ecuador and is an important city as it serves as an entry point into the Amazon jungle. The initiation of this year-long project was spurred by the devastation caused by malaria amongst the indigenous communities in Puyo. The aim was to identify healthy and effective ancestral practices to control the spread of malaria, such as the use of plants as an insect repellant and smoke within homes to repel mosquitoes and other harmful insects. The various indigenous populations of Puyo united in this cause and personnel of the Malaria Control Service were trained in basic intervention concepts.

Manenberg was deemed one of the most distressed communities in Capetown, labeled a “zone of poverty and social integration” by Capetown’s city officials. At the time of this project, the unemployment rate was 66% and it had the highest rate of public violence in the city. The Manenberg Initiative aimed to lay a more solid foundation for future generations by improving the school drop-out rate, providing a means of identifying and applying appropriate interventions for children with physical and/or developmental problems, and a parenting program. A donated shipping container was converted into a weekly operational clinic, housed behind the Manenberg Health Clinic, and was equipped with educational toys and learning aids, medical interns with experience in pediatrics, and early childhood development staff. This program has since continued thanks to the voluntary efforts of interns from the University of Capetown.

500 female patients, aged 40 years and older, were screened over the course of 5 months at the Centro de Salud in Colonia Estrella for precursory lesions associated with cervical cancer and said to be caused by human papillomavirus (HPV). Understanding the magnitude of the incidence of HPV and precursory lesions was essential to reduce rising rates of cervical cancer for women living in Oaxaca. Office supplies and computer equipment was provided to conduct the study and carefully track results.

The Avian Park Initiative-Container to Clinic 2006

Together with two local hospitals and a university in Capetown, CFHI renovated a large, metal storage container and transformed it into a fully-functioning health clinic for the Xhosa population and other ethnic groups. Commonly referred to as the “TB container”, the Avian Park clinic diverted their attention towards stringent TB treatment and outreach efforts to share knowledge of health awareness and preventive medicine. Not only did the clinic aid the health of the community, but it encouraged university students to work in Capetown’s disadvantaged neighborhoods and offered a unique learning opportunity.

In 2006, Amnesty International estimated that more than 950 children were living with their parents in the Bolivian prison system. The federal government did not have support measures in place for children separated from their parents. It was widely agreed upon that it would be more advantageous to these children to remain with their parents, most often their mothers, in jail rather than live as an orphan, unprotected society’s ills. This project provided 80 children under the age of 6 with continuous medical care and child psychological and social support.

Shuar Region of the Ecuadorian Amazon

Health promoters play a key role in improving the health outcomes of communities, especially in remote locations where health access can be an enormous challenge. They serve as a link to professional care and are regarded as vital members of their communities. 47 health promoters, women and men alike, who serve indigenous populations in the Shuar region of the Ecuadorian Amazon received trainings aligned with the Ecuadorian public healthcare system to strengthen capacity to address basic health issues within their communities. In this way they could render swifter access to preventative and emergency treatment. Enhancing the skills of health promoters-within designated limits-will also reduced strain on under-resourced health services in Ecuador.

A unique tracking system was designed to educate health personnel and 130 diabetic patients on management and preventative strategies to help curb further complications and stem a rising epidemic. Health professionals in the Pastaza Province succeeded in negotiating with the Ministry of Public Health Department of Epidemiology to implement the tracking system. The success of this community health project led to a national award granted by the Ecuadorian government and earned international recognition from the medical community. It was presented at the Latin American Diabetes Association and the 4th Latin American Internal Medicine Conference. Contingent on results, the tracking system may be replicated in other provinces.

Assessment of Tuberculosis in Rural Communities 2006-2007

At the start of the millennium, the coastal region of the southern state of Oaxaca had the 2nd highest incidence of pulmonary tuberculosis, with an increasing number of cases being reported each year. Poor hygiene, malnutrition, and dilapidated housing tormented communities. This project was undertaken to demonstrate the prevalence of pulmonary TB in Benito Juarez and San Miguel (Puerto Escondido) locales afflicting those 15 years of age or older. Due to a lack of resources, the only available data recorded had been from those who had presented at a clinic to receive testing. A local team conducted a large scale door-to-door survey in these two neighborhoods, collecting 1005 sputum samples and analyzing 307. Results would be compared with governmental statistics to accurately gage the prevalence of variant strains of TB and target effective preventative strategies. 29% of the samples tested positive, revealing 50% TB cases that had not been identified in government studies.

Leprosy and HIV/AIDS are two diseases that have strong social implications and for those suffering with the disease(s) may lead to ostracism by their families and communities. CFHI and their partners in Mumbai provided social support, essential medications, and surgical treatment to two communities burdened by these infectious diseases. 30 leprosy patients received reconstructive surgery to improve disfigured limbs and 50 leprosy patients received special footwear. 100 HIV positive patients received CD4 count tests and a generous supply of antiretroviral medication.

Type-2 diabetes is one of the leading causes of death in Puerto Escondido, a small coastal city that lacks resources to properly manage the disease. To encourage those with diabetes to volunteer for diagnostic and preventative testing, CFHI provided funds for a traveling kit, stocked with blood glucose monitors and strips, and a refrigerator to store insulin. This educational outreach campaign, lead by CFHI medical partner Dr. Castillo, reached 18,300 people aged 20 years and above.

90% of the population of Virar, an estimated 119,000 people, lived below the poverty line in 2005 with an astounding illiteracy rate of 78%. Basic medical services are prohibitively expensive and St. Theresa Hospital is ill-equipped to deal with even basic hygiene techniques. This financial barrier forces families to travel miles in search of free or more affordable medical care. CFHI provided funds for a cautery and suction machine for the operating room at St. Theresa Hospital, which enabled community members to receive a broader range of treatment locally at no cost.

The first of its kind, a scholarship program was created by the Genesis School, a privately run, well-funded school with highly credentialed teachers, to send exemplar students from Fanka, a nearby public school with appalling learning conditions for young children, to complete their education at Genesis. US $650 would cover the full cost of a child’s education for a year, including a uniform, books and supplies, and a daily hot meal. Young students selected from Fanka made great progress at the Genesis School.

In collaboration with a local Thangaon NGO, a 3-year preventative healthcare training was provided to 9 women elected by their villages to serve as Community Health Promoters (CHP). This project helped to augment the services of the Thangaon Clinic, located in remote regions of the Himalayas, and build self-esteem and self-worth amongst local women. The training focused on acquiring skills on topics such as, health education and behaviors, assessment of basic health needs of communities, nutrition, neo-natal care, child illness, family planning, routine immunization, promotional, preventive and curative strategies in safe motherhood and child survival, and the use of technical instruments in a primary health program.

In 1998, the villagers of Thangaon, notably Dr. U.S. Paul, partnered with CFHI to build a primary healthcare clinic that would serve the people of Than Gaon and 28 surrounding rural villages. For 12 years this clinic successfully provided access to essential health services for thousands living in remote regions of the Himalayas. In fact, it was the only accessible clinic within a 50km radius. The clinic has since relocated to Patti and is known as the Patti Healthy Village Clinic.